At least that’s the tone coming from an email she sent supporters on Friday. Warren, who ironically spent the last Democratic debate trying to distance herself from Buttigieg’s fundraising tactics, disclosed that it has only raised $17 million in the fourth quarter, marking a significant drop from her fundraising totals in the third quarter.

“So far this quarter, we’ve raised a little over $17 million. That’s a good chunk behind where we were at this time last quarter,” her e-mail says, according to CNBC. 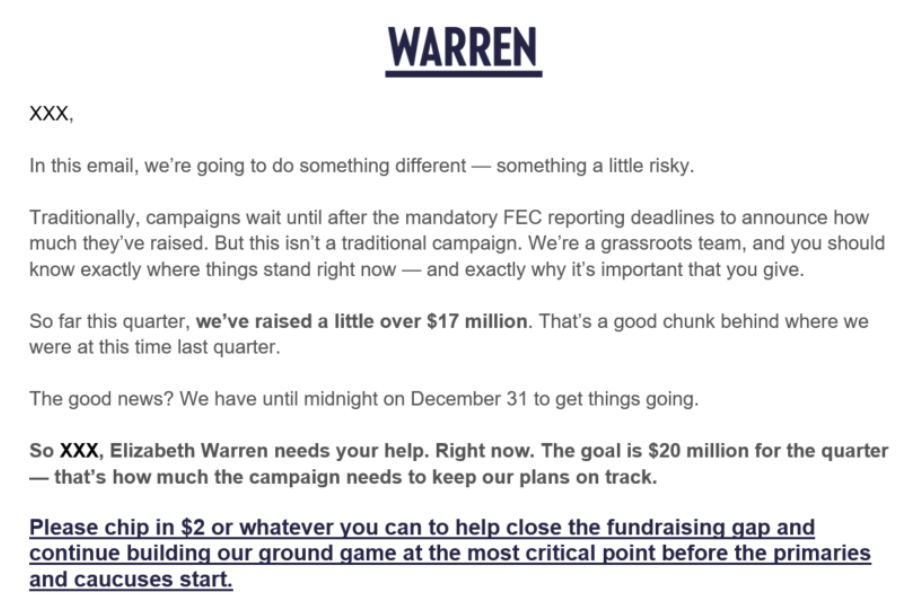 In the third quarter, her campaign brought in $24.6 million, far more than most other candidates, including Joe Biden and Buttigieg.

Warren’s momentum in the Democratic primary race has slowed in recent months, as she has fallen behind Joe Biden, who now leads the field of candidates. The plunge in fundraising also comes after Warren escalated her attacks on billionaires like Leon Cooperman and Mike Bloomberg, who she has accused of “trying to buy” the nomination.

Warren said during the last debate to Mayor Buttigieg: “So, the Mayor just recently had a fundraiser that was held in a wine cave full of crystals and served $900 a bottle wine. Think about who comes to that. He had promised that every fundraiser he would do would be open door but this one was closed door. We made the decision many years ago that rich people in smoke filled rooms would not pick the next President of the United States.”

You can watch Warren spar with Buttigieg at the last debate here:

Sen. Graham: ‘Someone Needs To Go To Jail’ For Steele Dossier Disinformation