On New Year’s morning, Conservative Base received a statement and announcement from one of Donald Trump’s top advisors, former Naval officer and police detective commander Steven Rogers. Conservative Base’s editor and former law enforcement and security chief, Jim Kouri, has known Steve Rogers for almost 35 years, working with him on several training projects and broadcast news media throughout the years.

I am not a political candidate. Simply put, I am a former U.S. Naval Officer who loves his country and continues to serve to the best of my ability. I ask that you please take a moment and read my short message to the American people.

As retired Lieutenant Commander in the United States Navy, who worked with the Office of Naval Intelligence my entire career, I always looked for threats to our nation. And once identifying those threats, I took the necessary steps to address them effectively, ensuring that they would not rear their ugly heads again.

I am pleased to say that the team of dedicated military personnel who worked hard to protect our nation, were very successful. Along with our nation’s national security teams, under the leadership of President Reagan, we were instrumental in eliminating the Soviet Union and buried the communist threat to America.

Unfortunately, as of this writing another threat has surfaced. A threat that we should not take to lightly. That threat is the socialist agenda that is being advanced by political leaders of the dem/socialist party who are seeking to advance the idea of total government control over our lives.

Today, the dem/socialist party is running candidates for local government positions such as Boards of Education, City Counsels, Mayor’s and county, state, and federal offices. Their agenda is a clear and present danger to our way of life.

They have put in jeopardy our 2nd Amendment Right to Bear Arms, our 1st Amendment Right to Free Speech, and Freedom of Religion to mention a few items on their agenda. And, they continue to hinder the ability of our nation’s law enforcement officers to do their job by advocating “politically correct policing policies” and hinder the ability of our nation’s educators to do their job by mandates designed to advance their agenda. It is no secret that many of our colleges are filled with so called educators who are no longer teaching, but instead indoctrinating their students to support socialism as a way of life.

Once again, I find myself identifying a threat to our nation, socialism, and now, instead of sitting idly by, I decided to do what I did when I was in the Navy- Take the necessary steps to address this threat-Socialism- effectively, ensuring that it will never rear its ugly head again.

Hence, as I continue to serve my country by traveling across our nation with a team of individuals who are now fighting the good fight of faith against those individuals who are looking to replace our “Shinning City on A Hill” with a dark agenda that will destroy our nation. I ask that you consider assisting me and my team.

First, please keep us and our nation in your prayers.  John 1:4-5 states, “The light shines in the darkness, and the darkness can never extinguish it.”

You, the American Patriots who love this country are the light that God will use to eliminate the darkness from our nation, and ensure that the “Shinning City on a Hill”- America remains a “City” of peace, prosperity, liberty, and freedom for our children, grandchildren and future generations of Americans.

I can use your help at this most important time in the history of our nation. Please join us in this fight for our country. 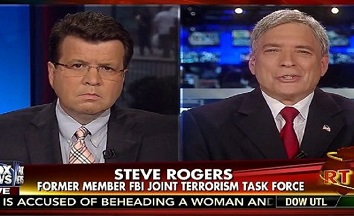 Lt. Steven Rogers served in the United States Air Force from 1970-1974. After receiving an honorable discharge in 1974, he became a police officer in the city of East Orange, New Jersey. In 1976, he left the East Orange Police Department and became a police officer in the Township of Nutley, N.J. until he retired in 2011 as a Detective Lieutenant, Commander of the police department’s criminal investigative division.  In 1991, Mr. Rogers was appointed by the NJ Attorney General to teach Community Policing methodologies at the Israeli National Police Academy, Beit Shemesh, Israel.

In 1986, Mr. Rogers enlisted in the United States Navy Reserves and served with the Office of Naval Intelligence until he retired as a Lieutenant Commander in 2004.  In 2001, he served as the Deputy Director Intelligence Support Group, Homeland Security. In 2002, he served as Deputy Chief of Staff, (N2) Intelligence, assigned as the U.S. Northern Command’s Senior Military Intelligence Officer to the FBI National Joint Terrorism Task Force, Washington, D.C.