Amid widespread reports that Iran’s Guardian Council, which serves as the country’s electoral watchdog, has disqualified thousands of candidates for a crucial parliamentary election set for Friday, the Trump administration has announced sanctions against five Iranian officials charged with preventing “free and fair” elections.

The US, Israel, and other countries believe conservative hard-liners are attempting to ensure a sweep, over and against reformers and ‘moderates’. The State Department previously called the nationwide elections a sham, and reiterated this during a Thursday press conference unveiling the newest sanctions.

“Tomorrow, the Iranian regime will stage an event euphemistically called elections,” US special envoy for Iran Brian Hook said. “Unfortunately for the Iranian people, the real election took place in secret long before any ballots were even cast.”

The US has previously slammed the Iranian system of allowing a 12-member Guardian Council to vet and “approve” of candidates getting on the ballot as “rigged”.

Special Rep. Hook: The Iranian regime is holding what it calls “elections” on February 21. But the clerics pick the winners & losers before the ballots are even cast. We call on the Iranian regime to give the Iranian people a real choice & let their voice be heard. #IranElections pic.twitter.com/BTyvuXhx21

“Together, these five officials oversee a process that silences the voice of the Iranian people, curtails their freedom and limits their political participation,” Hook continued.

He added that the council members “are the ones who really get to vote in Iran.” 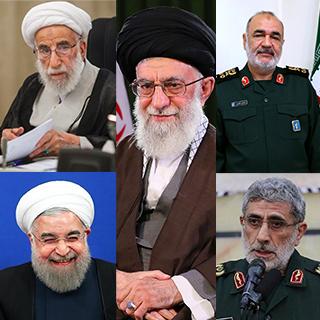 The State Department has said this translates to over 7,000 candidates being denied a place in Friday’s parliamentary elections.

Iranian officials more or less admitted to the “purge” earlier in the week, after weeks of campaigning, per the AFP:

Iran’s electoral watchdog on Wednesday defended its decision to disqualify thousands of candidates for a crucial parliamentary election in two days, as a lackluster campaign neared its end.

Conservatives are expected to make an overwhelming resurgence in Friday’s vote, which comes after months of steeply escalating tensions between Iran and its decades-old arch foe the United States.

Their gains would be made at the expense of those who back President Hassan Rouhani, a relatively moderate conservative who was re-elected in 2017 promising people more freedoms and the benefits of engagement with the West.

Those named in Thursday’s sanctions include secretary of the Guardian Council Ahmad Jannati, as well as former head of Iran’s judiciary Mohammad Yazdi, and council members Siamak Rahpeyk, Abbas Ali Kadkhodaei and Mohammad Hasan Sadeghi Moghadam. According to The Guardian, the more moderate faction represented in President Hassan Rouhani could be greatly limited in attempts to hold back hardline voices if conservatives overtake parliament.

“If the conservatives can take power, and appoint someone such as the former Tehran mayor Mohammad Baqer Qalibaf as speaker, Rouhani can be kept on a tight leash in his final year of office before fresh presidential elections,” according to the report.

The Left’s “Boycott” Of Goya Has Backfired Spectacularly As Conservative Customers Clean Out Store...