When it comes to its market, rates and economic forecasts, Goldman has long been one of Wall Street’s favorite contrarian, Gartman-like indicators: i.e., always wrong. From its notoriously terrible FX predictions (which we so bad, two of its recent global FX strategists quit because they literally couldn’t get one call right), from its atrocious STIR predictions, expecting four rate hikes in 2019 back in December 2018 as the Fed was set to reverse its tightening bias, and not only cut rates 3 times but launch QE4, to its perpetually optimistic S&P and economic forecasts, and last but not least, always incorrectly calling for higher yields by year end (any year end), it was easy to forget that Goldman was once one of the most respected banks on Wall Street instead of a bunch of sellside clowns whose only job was to get clients to do the opposite of what its flow traders were doing.

Which is why we were somewhat conflicted by Goldman’s latest prediction, because one day after the bank admitted that there would be no earnings growth in 2020 (after there was no EPS growth in 2019), Goldman’s chief economist Jan Hatzius admitted his rosy US growth forecast was dead wrong, and in a note today he writes that just a few weeks ago, “we estimated that the coronavirus would subtract about 2% (annualized) from Q1 global GDP growth. Since then, our China economists have cut their growth forecast further, the risk of global supply chain disruptions has become more acute, and increasing reports of community spread have started to weigh on everyday consumer activity in some countries. These developments require a rethink of our analysis and a fuller consideration of the range of economic scenarios that could play out in coming weeks and months.”

Which brings us to the reason we are conflicted: as part of Hatzius’ “rethink” of the global economic rout, he has come to a conclusion which shockingly may be correct for once, to wit:

Our new baseline scenario involves a continued slowdown in infections in China that allows for a slow recovery in high-frequency indicators of economic activity. However, it also includes moderate supply chain disruptions in the global goods-producing sector, as well as a hit to consumer spending and business activity from national outbreaks that go well beyond China and the other countries (such as Korea and Italy) that have been affected so far.

Our analysis shows effects on quarter-on-quarter annualized global GDP growth of -5pp in Q1 and -2pp in Q2, followed by a rebound in the second half of 2020, leaving our full-year global growth forecast at about 2%.

Yet even if all this is correct (it will be), Hatzius will still be wrong because he refuses to “go there”, and despite now expecting the worst hit the global economy since the global financial crisis, he merely anticipates “a short-lived global contraction that stops short of an outright recession.”

Why no recession? Because the bank which until Friday expected no rate cuts in 2020, suddenly expects no less than three rate cuts, and all of them taking place in the next three months:

… we would expect some monetary easing from a number of the world’s major central banks, including 75bp of rate cuts by the Federal Reserve through June starting with a 25bp cut in March. Although moderate Fed rate cuts are unlikely to be very powerful, the committee will probably be reluctant to disappoint market expectations for substantial rate cuts for fear of tightening financial conditions further.

Of course, by now Hatzius must be surely getting tired of being called the macroeconomic “Thomas Stolper” (long-time readers know what that means), and as a result he has quietly inserted two additional scenarios just to cover all his bases. While the “upside” scenario is meaningless as it has no hope in hell of occurring, it’s the downside one that is more ominous:

We also consider two alternative scenarios. The upside scenario assumes that the global spread of the virus is brought under control quickly and supply chain disruptions remain mostly absent; if so, global GDP would rebound in Q2, risk asset markets would recover sharply, and central banks may stay on hold. The downside scenario assumes widespread supply chain disruptions as well as domestic demand weakness across the global economy. This would involve sharp sequential contraction in global GDP in Q1 and Q2—i.e., a global recession—and probably an aggressive monetary easing campaign, including a return to the near-zero funds rate of the post-crisis period.

Notably, not even the market expects a full 3 rate cuts by the end of June, which suggests that for all its cheerful optimism, Goldman is bracing for its “downside scenario” materializing. 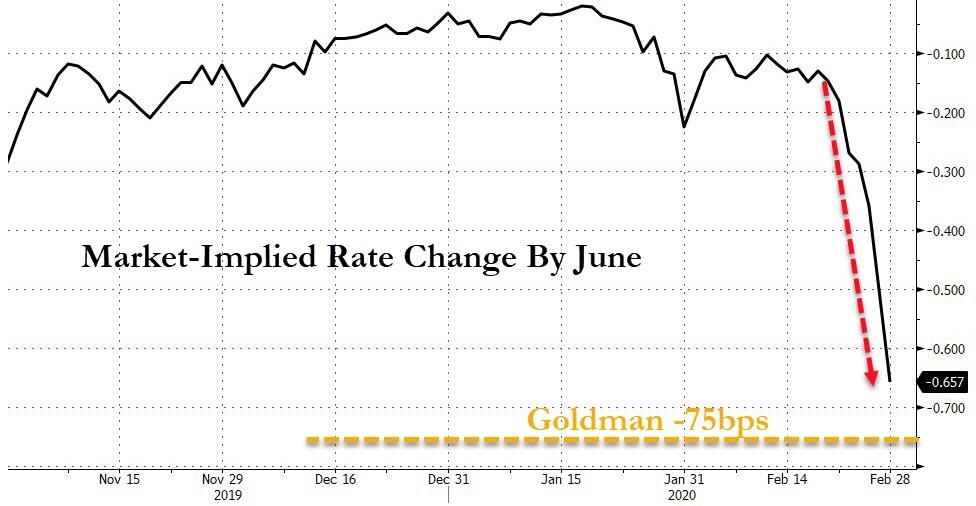 All of this means that after taking a lot of criticism from the unemployed, basement-dwelling macrotourists, also known as fintwit, Rabobank’s forecast of 0% rates by the end of 2020, which was made all the way back in August 2019, will be spot on. 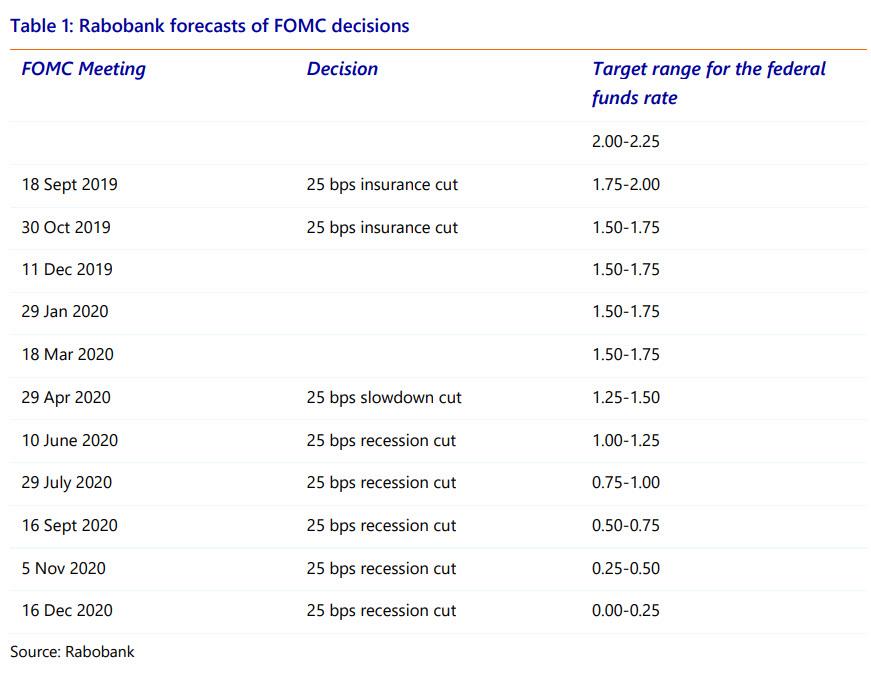 Now that Goldman officially broke the seal on rate cut forecasts, early on Friday afternoon, BofA rushed to one-up Goldman, and in a note from the bank’s chief economist, Michelle Meyer, now expects all those who we yesterday said were betting on 2 rate cuts in March, to make a killing. Why? Because it is now BofA’s base case that the Fed will cut rates bv 50bps, or twice, “at the March meeting to stem the panic in markets and support economic sentiment” and not only that “an emergency cut by the Fed prior to the meeting is possible – it will depend on the extent of market dysfunction.”

Some more details from BofA:

The Fed is being called into action and we expect a 50bp cut at the upcoming March 18th meeting. An emergency cut by the Fed prior to the meeting is possible – it will depend on the extent of market dysfunction. We see three key reasons for the Fed to ease.

As the chart below shows, a 50bps rate cut in March is more than even the market expected as of this afternoon, so yet another bank is basically saying a crisis is imminent (unless of course, BofA is admitting that all the Fed cares about is the stock market… which it can’t do as it would mean its strategists are now irrelevant as the Fed will never allow stocks to drop): 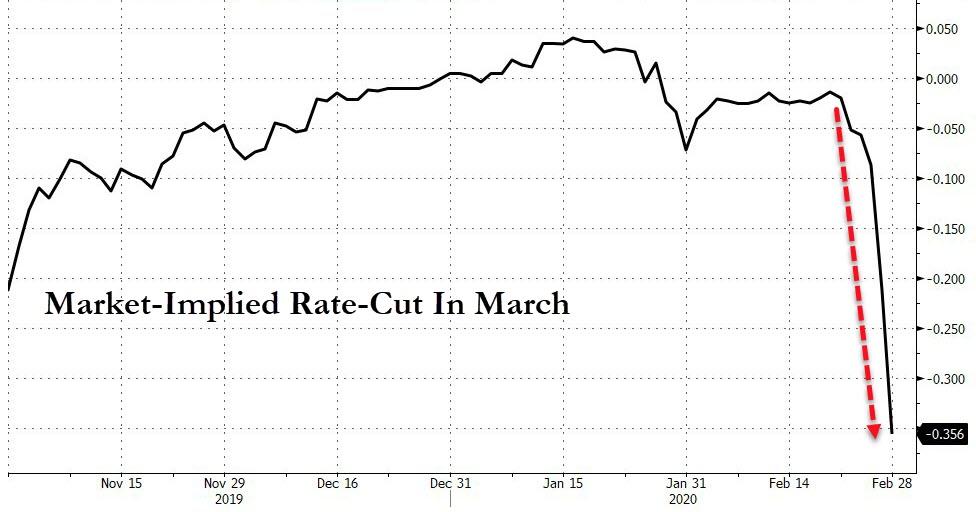 BofA then points out that while it is a choice between 50 and 25bp, “we think the Fed will cut 50bp in the meeting as a way to stem panic. If Fed officials believe the likely outcome is that they cut more than 25bp in reaction to these events, why not deliver it at once and provide a bigger positive impulse to the economy? This is not a “normal” easing cycle where the Fed has the luxury of time to see how incremental adjustments in rates impact the economy. The Fed could benefit from providing a significant thrust of easing. The market is also fully pricing in 25bp of easing at the March meeting and it is not in the Fed’s best interest to disappoint.”

Finally, the Fed may not wait until the schedule meeting as “Emergency is on the table”

It is possible that the Fed moves more quickly in an emergency fashion. However, we think the Fed would prefer to wait for the meeting in order to have some data and greater cover to justify the cut. The emergency inter-meeting cut would purely be to stop the panic in markets while a cut at the meeting would have a broader justification.

While BofA is now “convinced of Fed action – the only debate is over the timing and magnitude” and “much will depend on the news of the virus over the next two weeks. The CDC has warned that it is only a matter of time before COVID-19 shows up in a more meaningful way in the US. If headlines remain alarming, it will fuel expectations for aggressive Fed easing. However, it is also possible that fear subsides and we enter the March meeting in a calmer state. The latter would prompt only a 25bp cut but we don’t think it will be calm enough to allow the Fed to sit on hold. In other words, good news means 25bp. Continuation of news like this week means 50bp. Worse news about the spread of the virus could prompt an emergency cut. The Fed will be nimble.”

Well, of course it will be nimble: it needs to do everything in its power to avoid a market crash which would not only undo 11 years of trillions in liquidity injections, but wipe out what little credibility the US central bank had, resulting in the biggest financial crisis – and market – crash in history.

Jerry Nadler Says Antifa Is Imaginary So Jim Jordan Teaches Him a Lesson on...