We all know that most Democrats have never run a thing in their lives, yet they claim to be qualified to run practically everything.

Yet when voters give them a chance they almost always screw it so badly that the GOP dominates until voters memories have dimmed a bit, combined with the usual good dose of Republican haplessness.

Perfect example is wanna-be-chief Elizabeth “Fauxahauntus” Warren who basically opposes anything President Trump does even if it’s effective.

She opposes the border wall and thinks the money should go to the coronavirus response instead.

What would it look like if she got her way?

Here in one brutal cartoon is exactly why Democrats like Pow Wow Chow Lizzie, Commie Bernie or Slow Joe should never ever be allowed near the oval office: 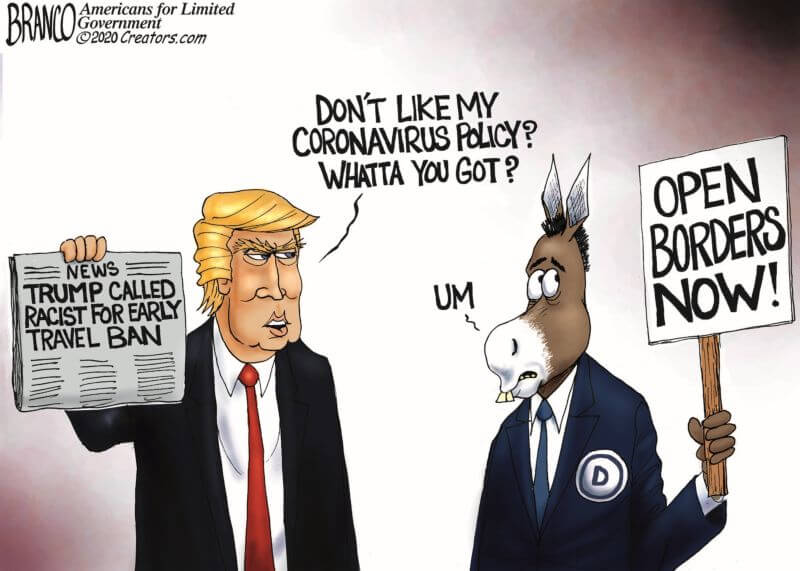 Does that about sum it up?

Democrats are inept and do not have a clue how to run anything. All they have is ideology and wishful thinking.

That’s why President Trump is winning, he knows how to get things done in the real world, outside of Washington D.C.

In fact when it comes to dealing with the coronavirus, President Trump IS getting things done, and protecting America and Americans in the process.

Television personality and addiction specialist Dr. David Drew Pinsky is firing back at those who have criticized Vice President Mike Pence’s response to epidemics when he was the governor of Indiana.

Last week when Pinsky appeared on “Daily Blast Live,” the hosts asserted that Pence “mishandled the HIV epidemic in 2015 with the needle-exchange program which one study said actually contributed to more deaths.”

But Pinsky quickly squashed that argument, saying that Indiana’s response was a model for others wanted to follow.

“I don’t know what they’re talking about,” he said to the hosts’ accusations against the vice president’s response to the HIV crisis.

“We used to point at the way Indiana responded to the opiate of the HIV epidemic as the model for the country.

“I don’t know what they’re talking about. The only reason I felt comfortable with Pence as vice president was I was aware of his track record in Indiana in handling these serious problems, and they handled them better than most states did, almost any other states.

“So, I don’t know what the hell people are talking about. That is fake news,” Dr. Pinsky asserted in Pence’s defense.

“Yes, it took everybody a while to respond properly to it, but they really took care of business in Indiana, so I have no idea what people are talking about.

“Whether Pence is the right person? Look, the right people are Anthony Fauci of the [Centers for Disease Control],” he said. “Dr. Fauci will tell you what’s going on, when you need to worry.

“I worked with him on the HIV epidemic back in the 80s; that guy’s been on top of infectious disease for 30 years.

“When there’s a problem, he will let us know, and he’s been saying exactly what I’ve been saying the whole way. Look to him, not me, and not even Vice President Pence; look at guys like Anthony Fauci whose responsibility is to contain these things.