The mainstream media is finally being forced to report something Infowars has covered for over two months.

Watch this live broadcast of The Alex Jones Show for updates on this article:

After non-stop attacks against media outlets or politicians suggesting COVID-19 came from a Chinese laboratory, MSM is now admitting it.

In fact, financial news site Zero Hedge was permanently suspended from Twitter after posting an article linking Wuhan’s Institute of Virology to the outbreak.

Ironically, Fox News’ Bret Baier and the Associated Press said “multiple sources” told them that “there is increasing confidence that the COVID-19 outbreak likely originated in a Wuhan laboratory.”

This may be the “costliest government cover-up of all time,” one of the sources said.

The sources believe the initial transmission of the virus – a naturally occurring strain that was being studied there – was bat-to-human and that “patient zero” worked at the laboratory, then went into the population in Wuhan.

The “increasing confidence” comes from classified and open-source documents and evidence, the sources said. Fox News has requested to see the evidence directly. Sources emphasized — as is often the case with intelligence — that it’s not definitive and should not be characterized as such. Some inside the administration and the intelligence and epidemiological communities are more skeptical, and the investigation is continuing.

While Fox stopped short of calling Covid-19 an intentional bioweapon, it was only a few months ago that the mainstream media in general was whitewashing the suggestion that the coronavirus came out of the Wuhan’s Institute of Virology, a top biohazard lab which was studying “the world’s most dangerous pathogens.”

On Feb. 1, Zero Hedge was suspended from Twitter after the outlet asked whether this lab was responsible for the Covid-19 outbreak that originated in Wuhan.

Zero Hedge linked to a Feb. 2017 profile on the lab by the Nature journal:

A laboratory in Wuhan is on the cusp of being cleared to work with the world’s most dangerous pathogens. The move is part of a plan to build between five and seven biosafety level-4 (BSL-4) labs across the Chinese mainland by 2025, and has generated much excitement, as well as some concerns.

Some scientists outside China worry about pathogens escaping, and the addition of a biological dimension to geopolitical tensions between China and other nations. But Chinese microbiologists are celebrating their entrance to the elite cadre empowered to wrestle with the world’s greatest biological threats.

“It will offer more opportunities for Chinese researchers, and our contribution on the BSL?4-level pathogens will benefit the world,” says George Gao, director of the Chinese Academy of Sciences Key Laboratory of Pathogenic Microbiology and Immunology in Beijing. There are already two BSL-4 labs in Taiwan, but the National Bio-safety Laboratory, Wuhan, would be the first on the Chinese mainland.

Ironically, the Nature journal later published an editor’s note on top of the piece which stated:

Many stories have promoted an unverified theory that the Wuhan lab discussed in this article played a role in the coronavirus outbreak that began in December 2019. Nature knows of no evidence that this is true; scientists believe the most likely source of the coronavirus to be an animal market.

How times have changed; now multiple media outlets are pointing the finger at the Wuhan lab as the source of Covid-19.

Now that the mainstream media is confirming that COVID-19 came from a Wuhan bioweapons lab, it’s more important than ever to document that Infowars and Alex Jones were vilified by the corporate media for exposing the Chinese origins of the virus as far back as January.

Watch and share these bombshell interviews and reports from February that vindicate the Infowars team and our expert guests: 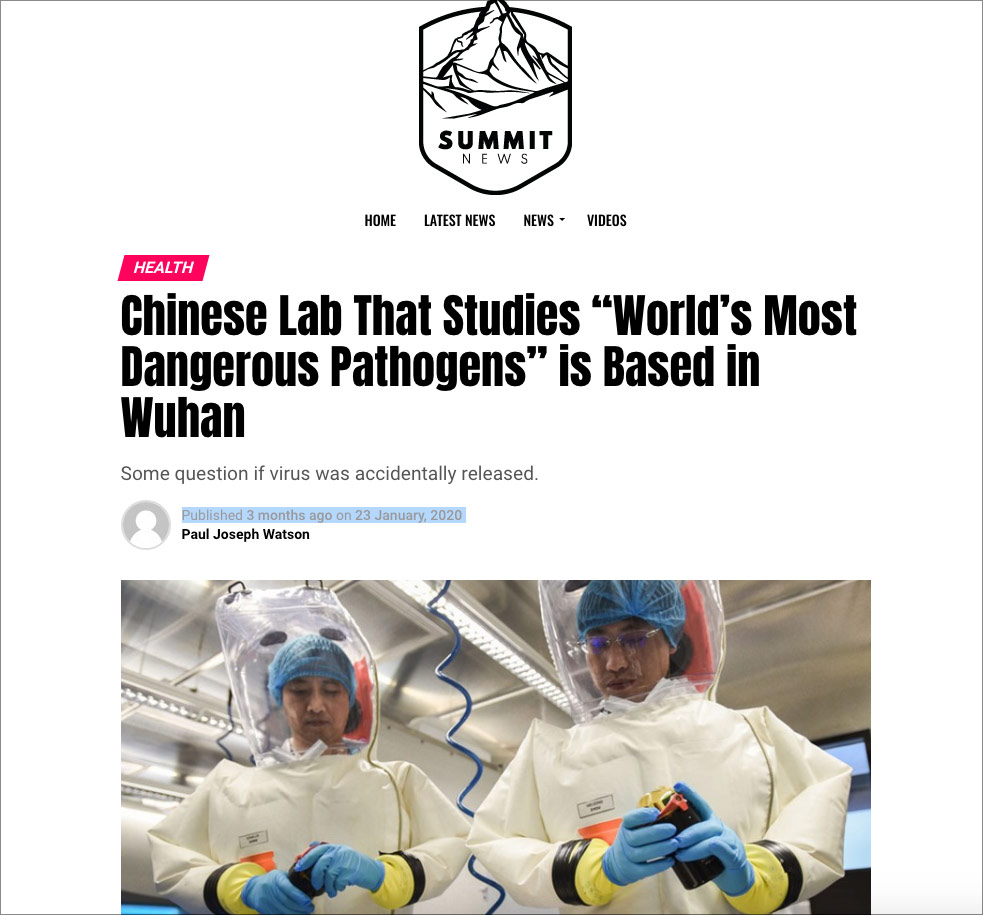 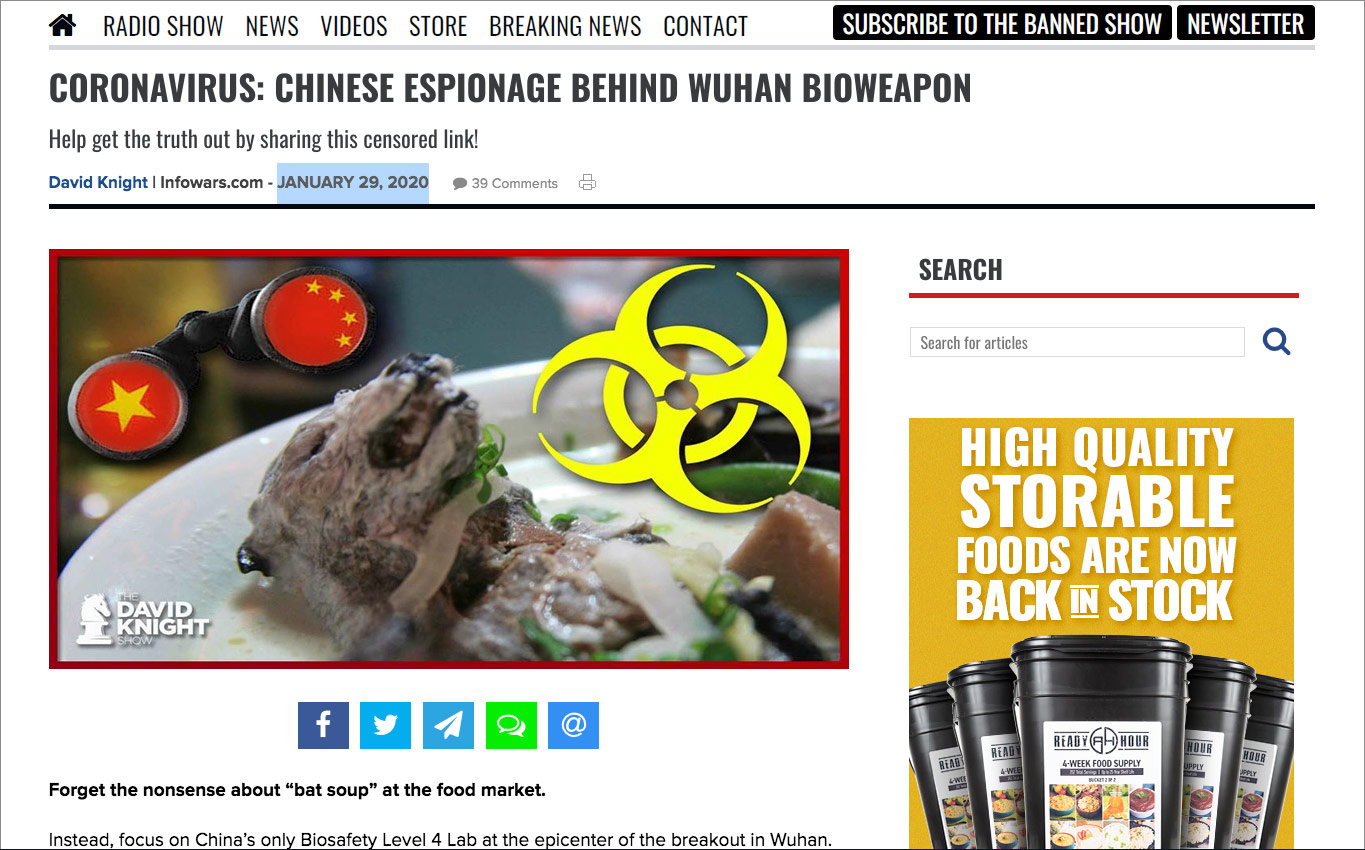 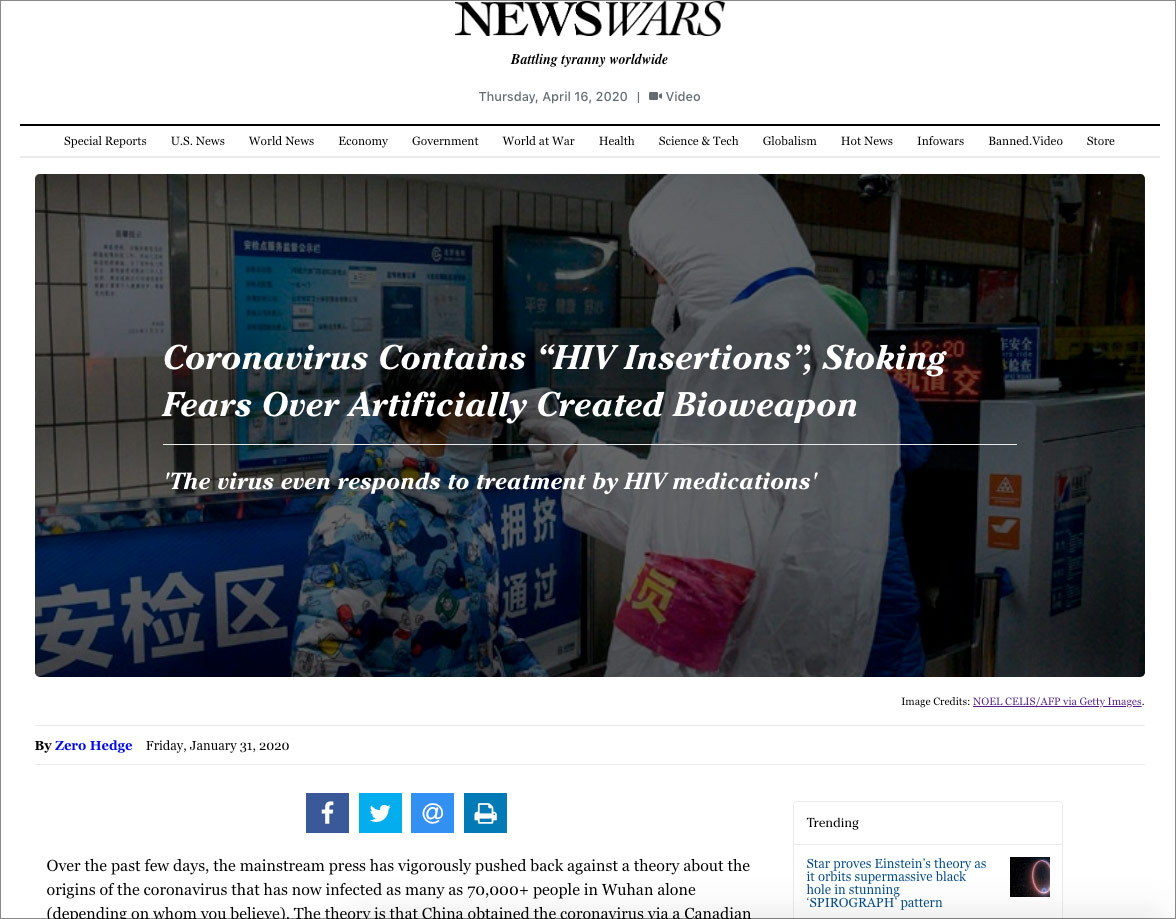 Coronavirus: Chinese Espionage Behind Wuhan Bioweapon
The biowarfare espionage behind the Chinese government’s Wuhan lab is now coming to light. Forget the nonsense about “bat soup” at the food market.

Coronavirus Contains “HIV Insertions”, Stoking Fears Over Artificially Created Bioweapon
The theory is that China obtained the coronavirus via a Canadian research program, and started molding it into a bioweapon at the Institute of Virology in Wuhan. Politifact pointed the finger at Zero Hedge, in particular, though the story was widely shared across independent-leaning media.

Bioweapons Expert: W.H.O. Is In On Biowarfare Weaponization Of Coronavirus
Dr. Francis Boyle, who drafted the Biological Weapons Act, joins Owen Shroyer on The Alex Jones Show to expose the 2019 Wuhan coronavirus as an offensive biological warfare weapon that the World Health Organization (WHO) already knows about.

Bioweapons Expert Exposes Coronavirus As A Weapon Of War in Must-See Interview
In an explosive interview, Dr. Francis Boyle, who drafted the Biological Weapons Act, has given a detailed statement admitting the 2019 Wuhan coronavirus is an offensive biological warfare weapon that the World Health Organization (WHO) already knows about.

Bioweapons Expert Delivers Urgent Message to Trump on Coronavirus Outbreak
Professor Francis A. Boyle joins The Alex Jones Show to deliver an urgent message to President Trump regarding the coronavirus outbreak as well as provide his analysis of the virus as a bioweapon.

White House Asks Scientists To Investigate If Coronavirus Was Bio-engineered
The director of the White House’s Office of Science and Technology Policy (OSTP), in a letter to the National Academies of Sciences, Engineering, and Medicine, requested that scientific experts “rapidly” look into the origins of the virus in order to address both the current spread and “to inform future outbreak preparation and better understand animal/human and environmental transmission aspects of coronaviruses.”

Full Transcript Of “Smoking Gun” Bombshell Interview: Prof. Frances Boyle Exposes The Bioweapons Origins Of The COVID-19 Coronavirus
Biological warfare expert Prof. Frances Boyle appeared as a guest with Alex Jones on the Alex Jones Show, sharing his “smoking gun” findings about the coronavirus being engineered as a weapon that’s designed, “for efficient spreading in the human population,” according to one of the science papers he references.

Bioweapons Whistleblower Blacklisted For Exposing Death Science Programs
Dr. Francis Boyle joins Mike Adams on The Alex Jones Show to break down the toll he has taken for standing up for the truth in the wake of bioweapon development.

Scientists Discover HIV-Like “Mutation” Which Makes Coronavirus Extremely Infectious
While mainstream scientists continue to perform mental gymnastics to insist that the new coronavirus wasn’t man-made, new research from scientists in China and Europe reveal that the disease happens to have an ‘HIV-like mutation’.

Iranian General: Coronavirus Is A Manmade Bio-weapon
An Iranian military leader has suggested that the coronavirus is not a naturally occurring disease, and that it is a manmade bioweapon cultivated and released against China and Iran by a ‘hostile state’.

Senator Cotton: China Unleashed This Plague On The World
GOP Senator Tom Cotton touted legislation Wednesday that would end US dependency on China for pharmaceuticals, stating that it poses a national security risk, as he asserted that China ‘unleashed’ the coronavirus on the rest of the planet and needs to pay for it.

Watch Infowars interviews and special reports on the origin of COVID-19 below:

Prepare for Plandemic 2: The Elites Are Going To Try This Again in The...